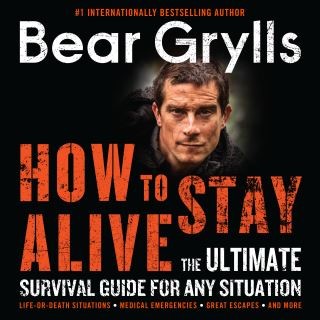 How to Stay Alive

The Ultimate Survival Guide for Any Situation

In the spirit of the multi-million copy bestselling SAS Survival Handbook comes the ultimate survival guide for the 21st century, from world-famous adventurer and former SAS soldier Bear Grylls.

For more than a decade, Bear Grylls has introduced TV viewers to the most dramatic wilderness survival situations, through his hit shows such as Man Vs. Wild. Now, with How to Stay Alive, Bear brings readers inside the wide variety of vital survival tactics he utilizes all the time, from basic everyday skills like avoiding blisters, to once-in-a-lifetime events like surviving a kidnapping.

Opening with the basic survival skills—assembling your survival kit, making a fire, building a shelter—and then moving on to more specific survival events, such as escapes, dealing with harsh terrain, and medical emergencies, Grylls is a sure guide for any type of disaster situation. Along the way we learn how to: survive in a life raft; land a helicopter in an emergency; treat hypothermia and frostbite; escape from quicksand; and numerous other essential, fascinating tips. For serious outdoorspeople, weekend warriors, and even couch potatoes looking for a vicarious thrill, How to Stay Alive is an invaluable guide.

How to Stay Alive will be the definitive outdoor survival tome for years to come.

Bear Grylls has become known around the world as one of the most recognized faces of survival and outdoor adventure. His journey to this acclaim started in the UK, where his late father taught him to climb and sail. Trained from a young age in martial arts, Bear went on to spend three years as a soldier in the British Special Forces, serving with 21 SAS. It was here that he perfected many of the skills that his fans all over the world enjoy watching him pit against mother-nature.

His TV show Man Vs Wild and Born Survivor became one of the most watched programmes on the planet with an estimated audience of 1.2 billion. He also hosts the hit adventure show 'Running Wild' on NBC in America, as well as 'The Island with Bear Grylls' & 'Bear's Wild weekends' for Channel 4 in the UK.

He is currently the youngest ever Chief Scout to the UK Scout Association and is an honorary Lt-Colonel to the Royal Marines Commandos.

He has authored 14 books including the number one Bestseller: Mud, Sweat & Tears.