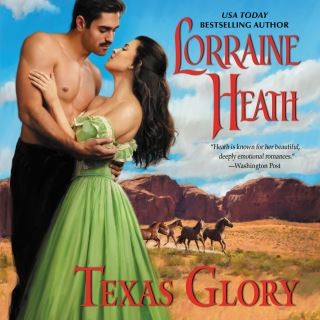 She never dreamed of the happiness . . .

Cordelia McQueen is little more than a prisoner in her father’s house until he barters her off to a stranger in exchange for land and water rights. Now in a new place and married to a man as big and bold as untamed Texas, Cordelia prepares to live within her husband’s shadow and help him achieve his goals.

Dallas has one driving ambition: to put West Texas on the map. Convinced he’s too harsh a man to be loved, he expects nothing except a son from his shy wife. But with each passing day, Dallas discovers a woman of immense hidden courage and fortitude. He is determined to give her his heart, even if it means letting her go to achieve her own dreams and find her own glory.

Lorraine Heath always dreamed of being a writer. After graduating from the University of Texas, she wrote training manuals, press releases, articles, and computer code, but something was always missing. When she read a romance novel, she not only became hooked on the genre, but quickly realized what her writing lacked: rebels, scoundrels, and rogues. She’s been writing about them ever since. Her work has been recognized with numerous industry awards, including RWA’s prestigious RITA®. Her novels have appeared on the USA Today and New York Times bestseller lists.