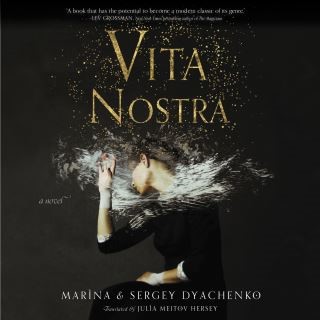 The definitive English language translation of the internationally bestselling Russian novel—a brilliant dark fantasy with "the potential to be a modern classic" (Lev Grossman), combining psychological suspense, enchantment, and terror that makes us consider human existence in a fresh and provocative way.

While vacationing at the beach with her mother, Sasha Samokhina meets the mysterious Farit Kozhennikov under the most peculiar circumstances. The teenage girl is powerless to refuse when this strange and unusual man with an air of the sinister directs her to perform a task with potentially scandalous consequences. He rewards her effort with a strange golden coin.

As the days progress, Sasha carries out other acts for which she receives more coins from Kozhennikov. As summer ends, her domineering mentor directs her to move to a remote village and use her gold to enter the Institute of Special Technologies. Though she does not want to go to this unknown town or school, she also feels it’s the only place she should be. Against her mother’s wishes, Sasha leaves behind all that is familiar and begins her education.

As she quickly discovers, the institute’s "special technologies" are unlike anything she has ever encountered. The books are impossible to read, the lessons obscure to the point of maddening, and the work refuses memorization. Using terror and coercion to keep the students in line, the school does not punish them for their transgressions and failures; instead, their families pay a terrible price. Yet despite her fear, Sasha undergoes changes that defy the dictates of matter and time; experiences which are nothing she has ever dreamed of . . . and suddenly all she could ever want.

A complex blend of adventure, magic, science, and philosophy that probes the mysteries of existence, filtered through a distinct Russian sensibility, this astonishing work of speculative fiction—brilliantly translated by Julia Meitov Hersey—is reminiscent of modern classics such as Lev Grossman’s The Magicians, Max Barry’s Lexicon, and Katherine Arden’s The Bear and the Nightingale, but will transport them to a place far beyond those fantastical worlds.

Marina And Sergey Dyachenko, a former actress and a former psychiatrist, are the coauthors of twenty-eight novels and numerous short stories and screenplays. They were born in Ukraine, lived in Russia, and now live in the United States. Their books have been translated into several foreign languages and awarded multiple literary and film prizes, including the 2005 Eurocon award for Best Author. They live in Marina Del Rey, California.