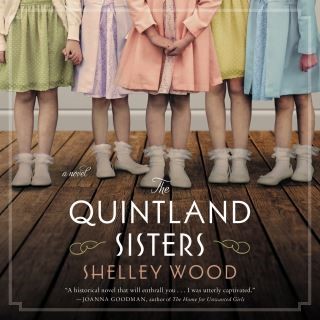 In Shelley Wood’s fiction debut, listeners are taken inside the devastating true story of the Dionne Quintuplets, told from the perspective of one young woman who meets them at the moment of their birth.

Reluctant midwife Emma Trimpany is just 17 when she assists at the harrowing birth of the Dionne quintuplets: five tiny miracles born to French farmers in hardscrabble Northern Ontario in 1934. Emma cares for them through their perilous first days and when the government decides to remove the babies from their francophone parents, making them wards of the British king, Emma signs on as their nurse.

Over 6,000 daily visitors come to ogle the identical “Quints” playing in their custom-built playground; at the height of the Great Depression, the tourism and advertising dollars pour in. While the rest of the world delights in their sameness, Emma sees each girl as unique: Yvonne, Annette, Cécile, Marie, and Émilie. With her quirky eye for detail, Emma records every strange twist of events in her private journals.

As the fight over custody and revenues turns increasingly explosive, Emma is torn between the fishbowl sanctuary of Quintland and the wider world, now teetering on the brink of war. Steeped in research, The Quintland Sisters is a novel of love, heartache, resilience, and enduring sisterhood—a fictional, coming-of-age story bound up in one of the strangest true tales of the past century.

Shelley Wood is a writer, journalist, and editor. Her work has appeared in the New Quarterly, Room, the Antigonish Review, Causeway Lit, and the Globe and Mail (UK). Born and raised in Vancouver, she has lived in Montreal, Cape Town, and the Middle East, and now has a home, a man, and a dog in British Columbia, Canada.