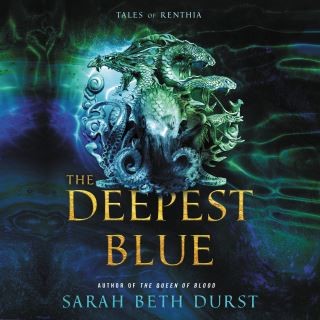 The natural magic of the classic The Island of the Blue Dolphins meets the danger and courage of The Hunger Games in this dazzling, intricate stand-alone fantasy novel set in award-winning author Sarah Beth Durst’s beloved world of Renthia.

Life is precious and precarious on the islands of Belene. Besieged by a capricious ocean full of malicious spirits, the people of the islands seek joy where they can. Mayara, one of the island’s fearless oyster divers, has found happiness in love. But on the day of her wedding to the artist Kelo, a spirit-driven storm hits the island with deadly force.

To save her loved ones, Mayara reveals a dangerous secret: she has the power to control the spirits. When the storm ends, she is taken into custody by the queen’s soldiers and imprisoned with other women like her.

They vary in age and social status, but to many they are heroes who will aide the country or witches that will sacrifice themselves trying. No matter who they are, the women are sent to a terrifying place—an island filled with bloodthirsty nature spirits, and left without food, water, shelter, or any tools except their own instincts and magic. Whoever survives the Island of Testing will be declared heirs to the queen. But no matter if she wins or loses, Mayara knows that the life she dreamed of is gone.

Sarah Beth Durst is the award-winning author of sixteen fantasy books for adults, teens, and kids, including The Queens of Renthia series, Drink Slay Love, and The Stone Girl’s Story. She won an ALA Alex Award and a Mythopoeic Fantasy Award, and has been a finalist for SFWA's Andre Norton Award three times. She is a graduate of Princeton University, where she spent four years studying English, writing about dragons, and wondering what the campus gargoyles would say if they could talk. Sarah lives in Stony Brook, New York, with her husband, her children, and her ill-mannered cat. For more information, visit her at sarahbethdurst.com.