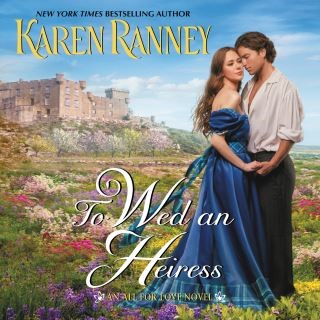 To Wed an Heiress

An All for Love Novel

Rebellion drove Mercy Rutherford to Scotland to escape the possessive grip of her fiancé. But it’s fate that lands her in the crumbling highlands castle of Lennox Caitheart. A dreamer with visions of inventing airships, he’s most certainly mad. Handsome beyond words, he’s also causing an irresistible flutter in her stomach beyond reason. When Gregory arrives to see their arranged marriage to its bitter end, Mercy desperately turns to Ross with an offer of her fortune—and her hand in marriage.

The Earl of Morton has a reputation for being a daredevil eccentric, but even he is hesitant to engage in such a rash proposition—no matter how utterly beguiled he is by the wildly independent American heiress. And yet, with so much at stake, how can he possibly say no? But when their unconventional union grows into a passionate and inseparable love, more than Gregory’s obsession threatens them. Now, Lennox and Mercy will have to risk more than their hearts to save it.

Karen Ranney wanted to be a writer from the time she was five years old and filled her Big Chief tablet with stories. People in stories did amazing things and she was too shy to do anything amazing. Years spent in Japan, Paris, and Italy, however, not only fueled her imagination but proved she wasn't that shy after all.

Now a New York Times and USA Today bestseller, she prefers to keep her adventures between the covers of her books. Karen lives in San Antonio, Texas.