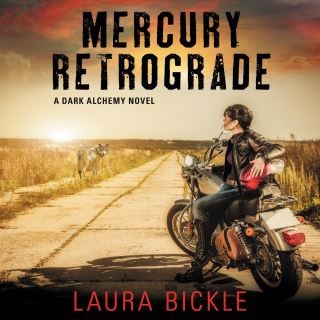 Something venomous has come to Temperance …

It's been two months since Petra Dee and her coyote sidekick Sig faced off against Temperance's resident alchemist, but things are far from quiet. When an Internet video of a massive snake in the backcountry of Yellowstone goes viral, a chase for the mythical basilisk is on. Monster hunters swarm into the area, and never one to pass up the promise of discovery, Petra joins in the search.

Among the newcomers is a snake cult on wheels―the biker gang Sisters of Serpens. Unlike some, the Sisters don't want to kill the basilisk―they want to worship it. But things get complicated when the basilisk develops a taste for human flesh that rivals the Sisters' own murderous skills.

Meanwhile, the alchemical tree of life is dying, and the undead Hanged Men of Temperance who depend on it know the basilisk may be their last chance for survival.

With time running out for everyone around her, Petra will be forced to decide who survives and who she must leave behind in this action-packed sequel to Dark Alchemy.

Laura Bickle grew up in rural Ohio, reading entirely too many comic books out loud to her favorite Wonder Woman doll. After graduating with an MA in Sociology–Criminology from Ohio State University and an MLIS in Library Science from the University of Wisconsin-Milwaukee, she patrolled the stacks at the public library and worked with data systems in criminal justice. She now dreams up stories about the monsters under the stairs. Her work has been included in the ALA’s Amelia Bloomer Project 2013 reading list and the State Library of Ohio’s Choose to Read Ohio reading list for 2015-2016. More information about Laura’s work can be found at www.laurabickle.com.