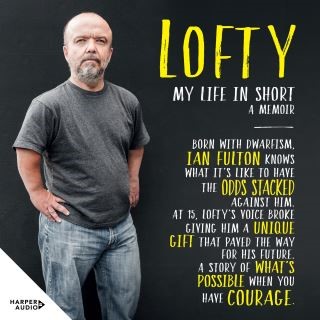 My Life in Short: A Memoir

A memoir of standing tall against the odds Australian voice-over artist Lofty Fulton knows what it's like to have the odds stacked against him: Born with achondroplasia, which is a form of dwarfism, his grandmother thought he should be locked away from the world. At school, he suffered years of relentless bullying, believing the lie he would never be loved or good enough.

At 15, Lofty's voice broke, giving him a unique gift that paved the way for his future.

LOFTY: MY LIFE IN SHORT is a deeply personal memoir - of vulnerability and courage and humour as Lofty unpacks the events of his traumatic childhood, public bigotry; a failed marriage, the highs and lows of a successful radio career and his struggles with crippling general anxiety disorder, clinical depression and a serious gambling addiction.

Lofty's story is a collusion of light and shade; a reflection on what it means to be human, to search for meaning and purpose. From brokenness to breakthrough, Lofty has slayed many of his inner demons, rising to become one of Australia's most sought after and recognisable voices.

Lofty Fulton is a freelance voice-over artist, who has been working in the Australian and overseas market since the early 1990s. Since then, he's worked across almost the entire spectrum of voice-over and for some of the biggest names in advertising, from McDonald's to Toyota, and all and sundry in between.  He has been the branding and promotional voice for major radio and TV network stations, both at home and overseas.

Over recent years, as the narrator of MasterChef Australia, his voice is heard in over 180 countries worldwide. Chances are you've heard him and don't even realise it. He is represented by EM Voices in Australia and Vox Inc. and the Sheppard Agency in the USA. For more information, see Lofty's website at www.loftyfulton.com.