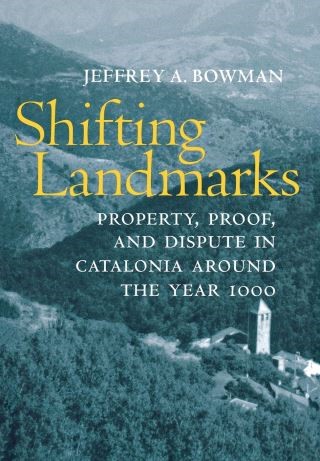 Property, Proof, and Dispute in Catalonia around the Year 1000

In a major contribution to the debate among medievalists about the nature of social and political change in Europe around the turn of the millennium, Jeffrey A. Bowman explores how people contended over property during the tenth and eleventh centuries in the province of Narbonne. He examines the system of courts and judges that weighed property disputes and shows how disputants and judges gradually adapted, modified, and reshaped legal traditions.

The region (which comprised Catalonia and parts of Mediterranean France) possessed a distinctive legal culture, characterized by the prominent role of professional judges, a high level of procedural sophistication, and an intense attachment to written law, particularly the Visigothic Code. At the same time, disputants relied on a range of strategies (including custom, curses, and judicial ordeals) to resolve conflicts. Chronic tensions stemmed from conflicting understandings of property rights rather than from pervasive violence; the changes Bowman tracks are less signs of a world convulsed in struggle than of a world coursing with vitality.

In Shifting Landmarks, property disputes serve as a bridge between the author's inquiry into learned ideas about justice, land, and the law and his close examination of the rough-and-tumble practice of daily life. Throughout, Bowman finds intimate connections among ink and parchment, sweat and earth.