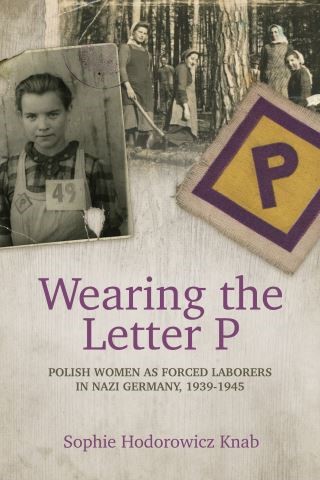 In this unflinching, detailed portrait of a forgotten group of Nazi forced labor survivors, author Sophie Horodowicz Knab reveals the personal stories of hundreds of Polish women who were forced to leave their homes to work in Nazi German factories and farms during World War II. From sexual assault, starvation, and illness to tremendous physical and psychological trauma, the atrocities these women suffered have never been fully explored until now.

Required to sew a large letter "P" onto their jackets, thousands of women, some as young as age 12, were taken from their homes in Poland and forced to work in Hitler’s Germany for months and years on end. As mothers, wives, daughters, and sisters, female Polish forced laborers faced a unique set of challenges and often unspeakable conditions because of their gender. Compelled to learn more about her own mother’s experience as a forced laborer, Sophie Hodorowicz Knab embarked on a personal quest to uncover details about this overlooked aspect of World War II history. She conducted extensive research in archives in the U.S., London, and Warsaw for over 14 years to piece together facts and individual stories.

Knab explains how it all happened, from the beginning of Nazi occupation in Poland to liberation: the roundups; the horrors of transit camps; the living and working conditions of Polish women in agriculture and industry; and the anguish of sexual exploitation and forced abortions—all under the constant threat of concentration camps. Knab draws from documents, government and family records, rare photos, and most importantly, numerous victim accounts and diaries, letters and trial testimonies, finally giving these women a voice and bringing to light the atrocities that they endured.