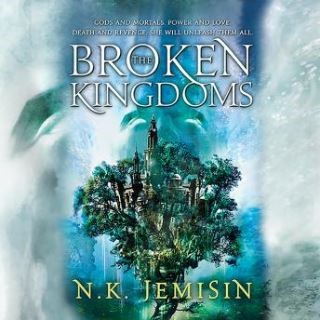 A man with no memory of his past and a struggling, blind street artist will face off against the will of the gods as the secrets of this stranger's past are revealed in the sequel to The Hundred Thousand Kingdoms, the debut novel of NYT bestselling author N. K. Jemisin.
In the city of Shadow, beneath the World Tree, alleyways shimmer with magic and godlings live hidden among mortalkind. Oree Shoth, a blind artist, takes in a strange homeless man on an impulse. This act of kindness engulfs Oree in a nightmarish conspiracy. Someone, somehow, is murdering godlings, leaving their desecrated bodies all over the city. And Oree's guest is at the heart of it. . .
The Inheritance Trilogy
The Hundred Thousand Kingdoms
The Broken Kingdoms
The Kingdom of Gods
The Inheritance Trilogy (omnibus edition)
Shades in Shadow: An Inheritance Triptych (e-only short fiction)
The Awakened Kingdom (e-only novella)
For more from N. K. Jemisin, check out:
Dreamblood Duology
The Killing Moon
The Shadowed Sun
The Broken Earth series
The Fifth Season
The Obelisk Gate
The Stone Sky
The Great Cities Trilogy
The City We Became