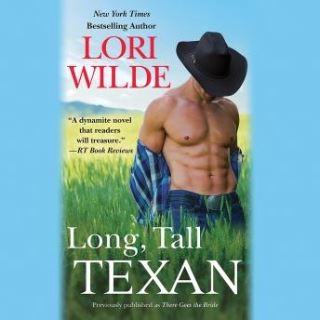 Long, Tall Texan (previously published as There Goes the Bride)

**Formerly published as THERE GOES THE BRIDE.

Texas socialite Delaney Cartwright knows she can't go through with her wedding. But she can't simply call the whole thing off. The nuptials to her nice, predictable childhood friend are the social event of the season (not to mention that her mother would freak). To fan the flames of this dying ember, Delaney abducts her fiancé for a night of passion-and grabs the wrong guy! A guy with smoldering eyes and an irresistible country-boy swagger...
Ever since his ex-wife left him on their honeymoon, Detective Nick Vinetti's sworn off relationships. And despite the sparks flying between him and Delaney, there's no way he's getting mixed up with another runaway bride. But when Delaney takes her "get out of marrying the wrong guy" attempts to the next level, landing herself in danger, Nick finds himself willing to do anything to keep her out of harm's way.