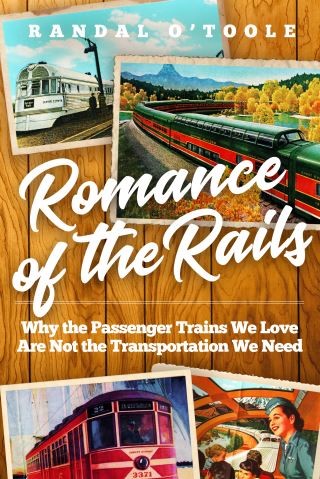 Romance of the Rails

American transportation has undergone many technological revolutions: from sailing ships to steamships; canals to railroads; steam to diesel; horsecars to electric streetcars; passenger trains and urban rail transit to airplanes and automobiles. Normally, the federal government has allowed and encouraged these revolutions, but today it continues to spend billions of dollars trying to preserve and build obsolete rail transit, passenger train lines, and high-speed trains. Does this make any sense? To explain how we have arrived at this juncture, O’Toole first provides a rich, extensively detailed history of rail in America. Then he delivers us to the present through a stage-by-stage review of rail transportation over the decades. As he moves forward, O’Toole shows how federally subsidized efforts to return to rail’s Golden Age, through massive infusions of funds to Amtrak and local transit agencies, are doing more harm than good to personal mobility. They are ineffective and inefficient ways of meeting, let alone improving, today’s transportation needs.

Instead, as O’Toole demonstrates, the transportation of the future will rely on America’s four million miles of roads and on air travel—both with far smaller infrastructure issues than rail. Further, O’Toole examines the costly allure of high-speed trains and light rail, illustrating their false promise and showing why passenger rail seems to work in Europe and Asia but does not and cannot in North America. As Romance of the Rails thoroughly chronicles, Americans love passenger trains, but we need an intervention—we have to stop expecting them to do for us now what they did in the 19th century. If we stay on the track we are now following, we will continue to be taken for a costly and wasteful ride.