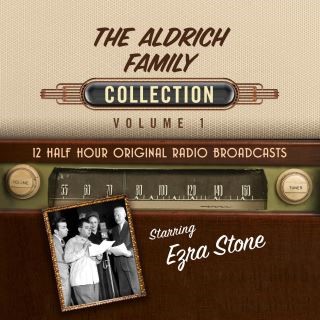 The Aldrich Family was a popular teenage situation comedy that was heard on radio and seen in films, television and comic books. The creation of playwright Clifford Goldsmith, teenager Henry Aldrich was an endearingly bumbling kid growing awkwardly into adolescence. Episodes revolved around Henry’s misadventures with girls, his family and his friends. Portrayed on radio by 20-something Ezra Stone, The Aldrich Family launched as a summer replacement program for Jack Benny in NBC’s Sunday night lineup, July 2nd, 1939, sponsored by Jell-O. Stone kept the lead role until 1942, when he entered the Army for WWII. Several actors took over until Stone returned to his signature role, including Bobby Ellis who became the last Henry Aldrich in 1952. House Jameson and Katharine Raht portrayed Henry’s parents, Sam and Alice. Mary Shipp played Henry’s usual girlfriend, Kathleen Anderson. Jackie Kelk played the role of Henry’s best friend, Homer Brown, for most of the run. In 1949, the program made the leap to television while continuing to air on radio with a different cast.