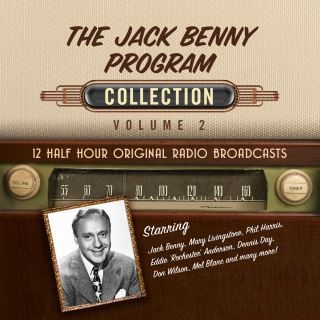 Jack Benny liked to portray himself as a skinflint but his generosity as a comic allowed other characters to get their fair share of laughs … usually at his expense. Benny got more laughs playing the straight man and didn’t care if he was the butt of the jokes. With his brilliant timing, smooth delivery, and trademark mannerisms, Benny was a huge influence on the development of the radio sitcom. References to Benny’s reputed stinginess, vanity, and infirmities were expected and weekly running gags established the program’s memorable characters. Benny’s real wife, Mary, was his sarcastic female friend; Phil Harris, the brash bandleader, Dennis Day the eager juvenile, Rochester the lovable butler and Don Wilson, the overweight announcer. Jack got his big break as a guest on The Ed Sullivan Radio Show in 1932 and was soon signed to his own show. Highlights included the long-running feud with fellow comedian Fred Allen, gags featuring a pet polar bear, and material about Jack’s run-down Maxwell jalopy. He insisted he was never older than 39, was a skinflint, and had difficulty playing “Love in Bloom” on his violin. A regular performer for more than two decades on radio, Jack made a seamless transition to television.