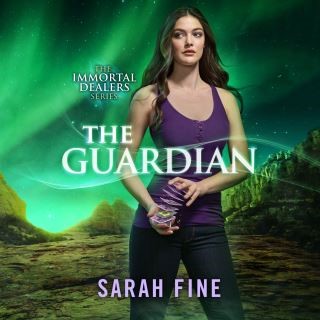 Life and death are a gamble for a girl fighting to save humanity in a world she’s only beginning to understand.

One minute, Ernestine “Ernie” Terwilliger was a fairly normal young woman with an almost normal life. Absent father. Peculiar mother. Family secrets. The next, she was hurled into a land where the Immortal Dealers are waging a battle between good and evil—and where the fate of the world is in the cards.

Having only started to master her own deck, the inexperienced Ernie places the wrong bet on the right guy at the worst time. That’s when she’s bounced into another realm and trapped there by a formidable and power-hungry rogue Dealer who knows more about Ernie’s fractured family than Ernie herself does.

Now, Ernie’s fight to free herself is only the beginning. As the secrets of Ernie’s father and his own relics of power start to surface, Ernie will need to tell friend from foe—a feat not as easy as it seems.

At least now she has a full deck…because to survive secrets, betrayals, and dangerous dimensions, she’ll need to deal the best hand.