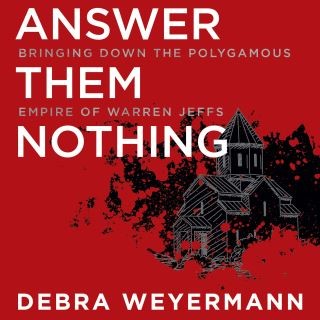 Bringing Down the Polygamous Empire of Warren Jeffs

When police raided the Short Creek compound of the Fundamental Church of Jesus Christ of Latter Day Saints in 1953, it soon became a political and publicity nightmare and eventually cost the governor of Arizona his job. From that point on, skittish public officials allowed the polygamist sect to practice its tenants unmolested for the next 50 years and turned a blind eye to child abandonment, kidnapping, statutory rape, incest, and massive tax and welfare fraud.

But then Warren Jeffs, a new FLDS prophet, escalated the sect’s crimes to near madness. Activists watched in horror as he used his limitless authority and the resources of a tax-supported community—in essence, a feudal empire on the Utah/Arizona border—to devastate thousands of lives on cruel whims, marrying girls as young as 11 to 60-year-old men and driving off teenage “lost boys” who Jeffs felt threatened his authority.

Answer Them Nothing is the chilling story of the victims, activists, prosecutors, judges, cops, and attorneys who in 2001 began the struggle to dismantle the FLDS empire and bring Jeffs and his henchmen to justice. It is a mesmerizing journey into one of America’s darkest corners, a story that stretches over three states and deep into history of the powerful Mormon Church.