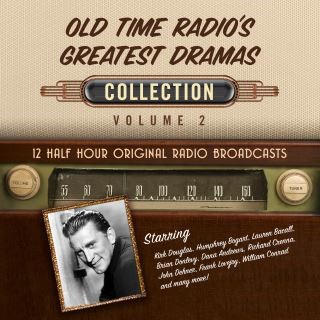 The golden age of radio had incredible drama shows that kept Americans glued to their radio sets. Families gathered around their living room radios to be entertained by the greatest names in Hollywood each and every day. The biggest stars from tinsel-town lent their voices to radio dramas and most of the time the producers and sponsors allowed them to take a curtain call to plug their latest film release. This terrific collection of 12 great radio drama shows includes episodes of Bold Venture starring real-life husband and wife Humphrey Bogart and Lauren Bacall; Kirk Douglas reprising his film role in “Champion” on The Screen Director’s Playhouse ; Brian Donlevy stars as secret agent Steve Mitchell who is sent on another Dangerous Assignment; Dana Andrews stars as real-life counterspy Matt Cvetic who infiltrated a local Communist Party cell and reported back to the FBI on their activities in I Was A Communist for the FBI ; Frank Lovejoy is newspaperman Randy Stone combing the windy streets of Chicago looking for another human interest story on Night Beat and John Dehner stars on Escape, radio’s greatest series of high adventure. You’ll also enjoy episodes of Big Town, The First Nighter Program, The Green Hornet, Gang Busters and more!