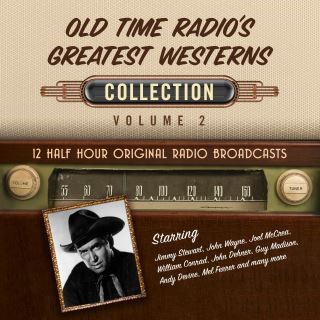 The golden age of radio had incredible western shows that kept Americans glued to their radio sets. Families gathered around their living room radios to hear western heroes catch the bad-guys and save ladies in distress. This collection includes John Wayne and Mel Ferrer starring in a radio adaptation of the John Ford film “She Wore a Yellow Ribbon” on The Lux Radio Theatre; William Conrad as U.S. Marshal Matt Dillon on Gunsmoke; Joel McCrea in a true-crime story on Tales of the Texas Rangers and Curley Bradley starring in two episodes of Tom Mix. You’ll also hear James Stewart starring in a radio recreation of his hit film “Winchester ‘73” on The Lux Radio Theatre; John Dehner in a western episode of Escape; Guy Madison as Wild Bill Hickok and more tales of the old west!