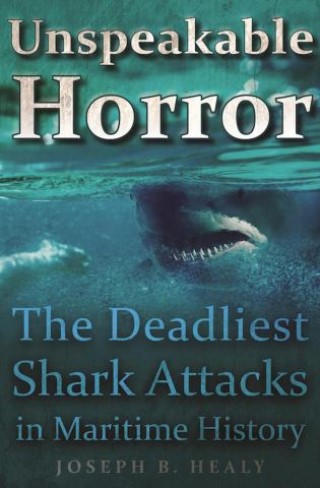 A chilling collection of the bloodiest shark attacks due to maritime disasters—including the legendary story of the ill-fated USS Indianapolis.

All those who go to sea—whether on a warship or a cruise ship—know in the back of their minds that there is the possibility of their boat going down. But what hides in the darkest part of their hearts is the knowledge that if they survive the sinking, they may encounter a fate far worse than drowning: falling prey to the ultimate predators of the deep—sharks.

Not for the faint of heart—or anyone with a fear of “going in the water”—Unspeakable Horror brings together the true stories of some of the most gruesome feeding frenzies ever. Like the story of the USS Indianapolis which was sunk by a Japanese torpedo in the South China Sea during World War II. Nine hundred men survived the torpedoing. But after four days of attacks by a massive frenzy of white tip sharks, only three hundred sailors were left.

Here, that tragic tale and more than a dozen other stories of bloody horror at sea are told—a terrifying reminder that while humans may rule the earth, sharks rule the seas . . .