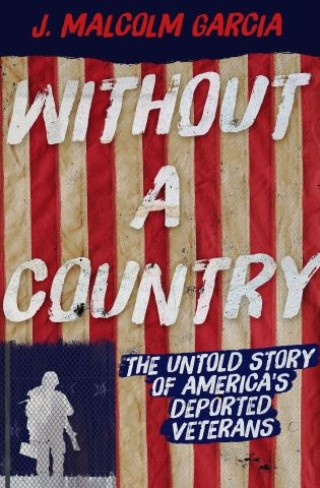 “Timely and compelling . . . What kind of country do we want to be? A nation that cares for our war veterans, or one that deports them into the unknown?” (Brian Castner, author of Disappointment River)

Many Americans believe service in the military to be a quintessential way to demonstrate patriotism. We expect those who serve to be treated with respect and dignity. However, as in so many aspects of our politics, the reality and our ideals diverge widely in our treatment of veterans. There is perhaps no starker example of this than the continued practice of deporting men and women who have served.

J. Malcolm Garcia has travelled across the country and abroad to interview veterans who have been deported, as well as the families and friends they have left behind, giving the full scope of the tragedy to be found in this all too common practice. Without a Country analyzes the political climate that has led us here and takes a hard look at the toll deportation has taken on American vets and their communities.

Deported veterans share in and reflect the diversity of America itself. The numerous compounding injustices meted out to them reflect many of the still unresolved contradictions of our nation and its ideals. But this story, in all its grit and complexity, really boils down to an old, simple question: Who is a real American?

“I don’t know if he’s unheralded, but there’s a writer named J. Malcolm Garcia who continually astounds me with his energy and empathy. He writes powerful and lyrical nonfiction from Afghanistan, from Buenos Aires, from Mississippi, all of it urgent and provocative. I’ve been following him wherever he goes.” —Dave Eggers