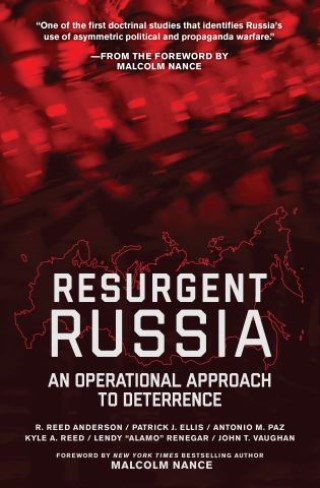 An Operational Approach to Deterrence

Groundbreaking research on current Russian interference and aggression from six former US Army War College students who briefed the Pentagon.

Relations between the United States and Russia have recently escalated from strained to outright aggressive. From imperial expansion in Ukraine to intervention in Syria to Russian hacking during the US election in 2016, it is clear that the United States must be prepared to defend itself and its NATO allies against Russian aggression.

Resurgent Russia, researched and written by six former residents and internationally experienced officers at the US Army War College, analyzes the current threat of Russian acts of war—both conventional military attacks and unconventional cyber warfare or political attacks—against the United States and NATO. The officers detail how America can use its international military resources and political influence to both prepare for and deter aggression ordered by Vladimir Putin, making it clear that such an attack would be unsuccessful and therefore keeping the peace. This study provides a clear assessment of how the United States and its allies must utilize their political and military power to deter Russian aggression and maintain the hierarchy of power in today’s world.

“One of the first doctrinal studies that identifies Russia’s use of asymmetric political and propaganda warfare.”—Malcolm Nance, from the foreword