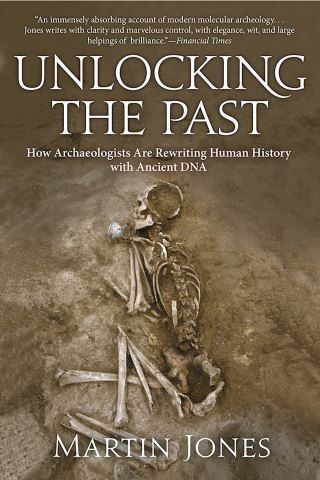 How Archaeologists Are Rewriting Human History with Ancient DNA

The science of bioarchaeology—a cutting edge and enlightening field—reveals the secrets of our past in “one of the most important books of the year” (New Statesman).

In Unlocking the Past, Martin Jones—a leading expert at the forefront of bioarchaeology, the discipline that gave Michael Crichton the premise for Jurassic Park—explains how this pioneering science is rewriting human history and unlocking the stories of our past.

For the first time, the building blocks of ancient life—DNA, proteins, and fats that have long been trapped in fossils and rock—have become widely accessible to scientists. Their amazing discoveries have influenced the archaeological debate at almost every level and continue to reshape our understanding of the past—from the actual ingredients used in ancient diets, to when human beings began boiling water, to how mankind survived in its most primitive state.

Conveying both the excitement of innovative research and the sometimes bruising rough-and-tumble of scientific debate, “Jones writes with clarity and marvelous control, with elegance, wit, and large helpings of brilliance” (Financial Times).