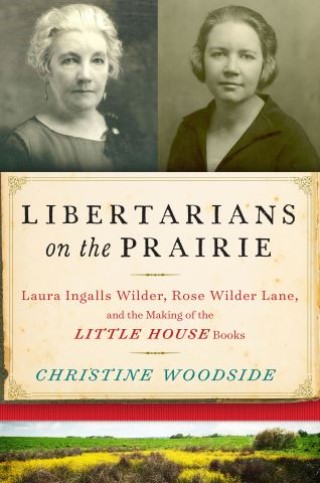 Libertarians on the Prairie

A myth-busting book of the real Ingalls family that “shines light on the political views . . . below the surface of the Little House series” (History Channel).

Generations of children have fallen in love with the pioneer saga of the Ingalls family, of Pa and Ma, Laura and her sisters, and their loyal dog, Jack. Teaching millions of Americans about frontier life, Laura Ingalls Wilder’s Little House books became emblematic of our national identity. Yet few realize that this cherished bestselling series wandered far from the actual experiences of the Ingalls family, and from what Laura herself understood to be central truths about life on the prairie.

In this groundbreaking narrative of literary detection, Christine Woodside reveals the full extent of the collaboration between Laura and her daughter, Rose Wilder Lane, who shared the political values of Ayn Rand and became a mentor to Libertarian presidential candidate Roger Lea MacBride. Drawing on original manuscripts and letters, Woodside shows how Rose reshaped her mother's story into a series of heroic tales that rebutted the policies of the New Deal. Their secret collaboration would lead in time to their estrangement.

Libertarians on the Prairie is a “myth-busting” deconstruction of an American icon as well as a historical profile that “masterfully captures the behind-the-scenes story of two strong-willed women locked in an uneasy, but interdependent, enterprise” (Shoreline Times).