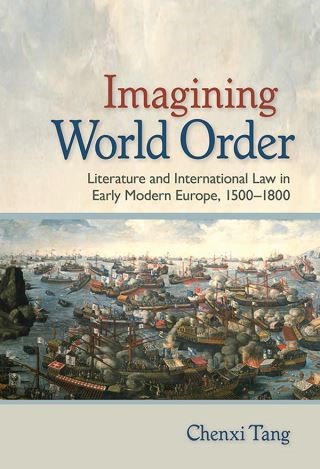 In early modern Europe, international law emerged as a means of governing relations between rapidly consolidating sovereign states, purporting to establish a normative order for the perilous international world. However, it was intrinsically fragile and uncertain, for sovereign states had no acknowledged common authority that would create, change, apply, and enforce legal norms. In Imagining World Order, Chenxi Tang shows that international world order was as much a literary as a legal matter. To begin with, the poetic imagination contributed to the making of international law. As the discourse of international law coalesced, literary works from romances and tragedies to novels responded to its unfulfilled ambitions and inexorable failures, occasionally affirming it, often contesting it, always uncovering its problems and rehearsing imaginary solutions.

Tang highlights the various modes in which literary texts—some highly canonical (Camões, Shakespeare, Corneille, Lohenstein, and Defoe, among many others), some largely forgotten yet worth rediscovering—engaged with legal thinking in the period from the sixteenth to the eighteenth century. In tracing such engagements, he offers a dual history of international law and European literature. As legal history, the book approaches the development of international law in this period—its so-called classical age—in terms of literary imagination. As literary history, Tang recounts how literature confronted the question of international world order and how, in the process, a set of literary forms common to major European languages (epic, tragedy, romance, novel) evolved.