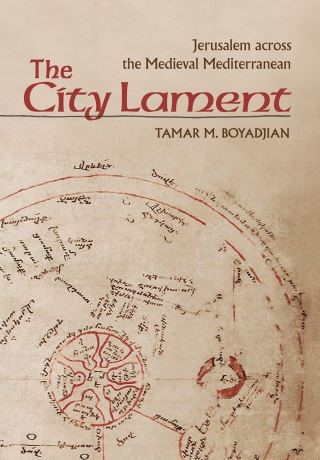 Jerusalem across the Medieval Mediterranean

Poetic elegies for lost or fallen cities are seemingly as old as cities themselves. In the Judeo-Christian tradition, this genre finds its purest expression in the book of Lamentations, which mourns the destruction of Jerusalem; in Arabic, this genre is known as the ritha al-mudun. In The City Lament, Tamar M. Boyadjian traces the trajectory of the genre across the Mediterranean world during the period commonly referred to as the early Crusades (1095–1191), focusing on elegies and other expressions of loss that address the spiritual and strategic objective of those wars: Jerusalem. Through readings of city laments in English, French, Latin, Arabic, and Armenian literary traditions, Boyadjian challenges hegemonic and entrenched approaches to the study of medieval literature and the Crusades.

The City Lament exposes significant literary intersections between Latin Christendom, the Islamic caliphates of the Middle East, and the Armenian kingdom of Cilicia, arguing for shared poetic and rhetorical modes. Reframing our understanding of literary sources produced across the medieval Mediterranean from an antagonistic, orientalist model to an analogous one, Boyadjian demonstrates how lamentations about the loss of Jerusalem, whether to Muslim or Christian forces, reveal fascinating parallels and rich, cross-cultural exchanges.