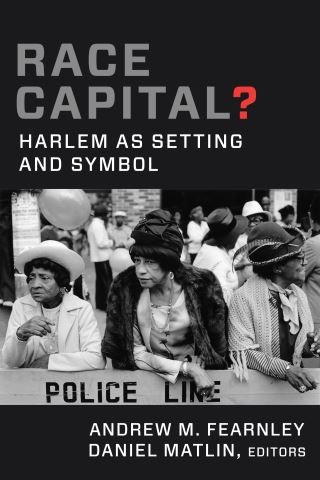 Harlem as Setting and Symbol

For close to a century, Harlem has been the iconic black neighborhood widely seen as the heart of African American life and culture, both celebrated as the vanguard of black self-determination and lamented as the face of segregation. But with Harlem’s demographic, physical, and commercial landscapes rapidly changing, the neighborhood’s status as a setting and symbol of black political and cultural life looks uncertain. As debate swirls around Harlem’s present and future, Race Capital? revisits a century of the area’s history, culture, and imagery, exploring how and why it achieved its distinctiveness and significance and offering new accounts of Harlem’s evolving symbolic power.

In this book, leading scholars consider crucial aspects of Harlem’s social, political, and intellectual history; its artistic, cultural, and economic life; and its representation across an array of media and genres. Together they reveal a community at once local and transnational, coalescing and conflicted; one that articulated new visions of a cosmopolitan black modernity while clashing over distinctions of ethnicity, gender, class, and sexuality. Topics explored include Harlem as a literary phenomenon; recent critiques of Harlem exceptionalism; gambling and black business history; the neighborhood’s transnational character; its importance in the black freedom struggle; black queer spaces; and public policy and neighborhood change in historical context. Spanning a century, from the emergence of the Harlem Renaissance to present-day controversies over gentrification, Race Capital? models new Harlem scholarship that interrogates exceptionalism while taking seriously the importance of place and locality, offering vistas onto new directions for African American and diasporic studies.