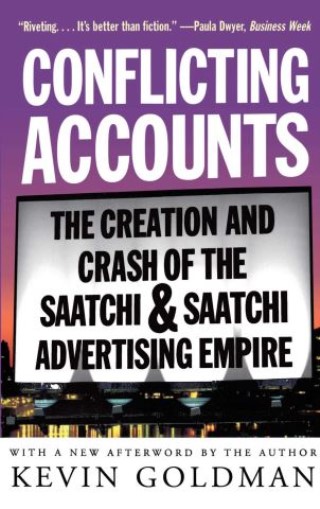 The Creation and Crash of the Saatchi and Saatchi Advertising Empire

In this fascinating and in-depth depiction of corporate greed and the politics of power, go behind-the-scenes of the ugly and bitter feud in an industry that is supposed to know the steep price for image run amok.

On December 16, 1994, a bloodletting took place in the stylish boardroom at Saatchi & Saatchi, once the world’s largest advertising agency. The cofounders of the company, Maurice and Charles Saatchi, were fired after threats by the firm’s shareholders but less than a month later, Maurice Saatchi started a rival ad agency and quickly and viciously snapped up former Saatchi & Saatchi clients.

With expansive research and eye-opening interviews, Kevin Goldman effortlessly explores this dramatic saga from the early, audacious start of the firm to the meteoritic rise of the Saatchi brothers and their ultimate fall. From the glitzy and extravagant lifestyle of the advertising industry of the 1970s and 1980s to the dramatic mergers and takeovers that altered Madison Avenue and London forever, Conflicting Accounts is an unputdownable and masterful work, perfect for fans of Mad Men and The Smartest Guys in the Room.

Kevin Goldman: Kevin Goldman has written for The New York Times and been a reporter for the Philadelphia Inquirer, Variety, and The Wall Street Journal, where for more than three years he was the daily advertising columnist. He lives in New York City with his wife and two children.