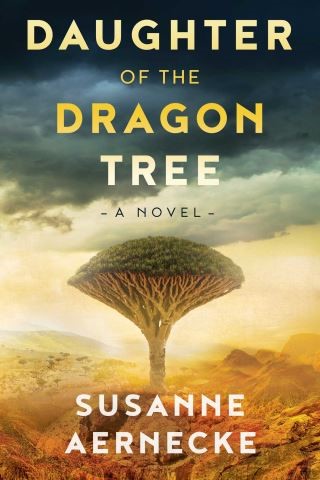 Daughter of the Dragon Tree

Two young women, with intertwined fates centuries apart, must protect the secret of the powerful, all-healing mushroom known as amakuna

1492: For millennia, the medicine women of the Guanches, the indigenous people on the Canary Island of La Palma, have used a psychotropic mushroom to look into the past and the future. But the mushroom has other sacred powers: It can cure disease or injury and it links the fate of those who consume it across all eternity. These secret powers are closely guarded by the medicine women, for they can foresee the destructive forces that would be unleashed if the sacred mushroom fell into the wrong hands.

Present day: Romy, a young doctor at a biomedical research company, sets out alone on a rock-climbing trek near her home in Germany. Halfway through her climb, an unusual panic overtakes her and she blacks out as she falls more than 25 feet from the face of a cliff . . . Coming to, hours later, she finds herself in a cave, remarkably unscathed, with a strange taste in her mouth as well as a vivid recollection of an ancient ritual centered on a sacred mushroom called “amakuna.”

Plagued by visions from the amakuna ceremony, including the death of an old medicine woman under a peculiar looking tree and the appointment of a young apprentice, Iriomé, to take her place, Romy begins to feel as if Iriomé is trying to contact her across the centuries. Identifying the tree from the visions as a Canarian Dragon Tree, she heads to the Canary Island of La Palma to discover the truth behind her visions and her and Iriomé’s intertwined fates.

In the heart of the island’s volcanic crater, she discovers the reality of the strange mushroom and its magical, all-healing, all-seeing powers. She brings some of the mushroom back to Germany and experiments with it, leading to repeated flashbacks of Iriomé’s life. But pharmaceutical mega-corporations are already in hot pursuit of her and will stop at nothing to take possession of the amakuna--not even murder.

As Romy and Iriomé’s lives continue to parallel across the centuries, they both find themselves in love with powerful men, pregnant, far from home, and in danger. But while Iriomé’s fate is in the past and sealed, Romy’s has not yet been decided, nor has the fate of the mushroom, which she learns has the power to either destroy life or preserve it. Will Romy be able to protect the powerful amakuna secret, as generations of medicine women have done before her? Or will she fall victim to betrayal as Iriomé did, and be forced to destroy the sacred mushroom before it can destroy the planet?

Susanne Aernecke: Susanne Aernecke studied directing at the Munich Film Academy in Germany and is an acclaimed filmmaker, shooting documentaries with shamans in Brazil, Buddhist monks in Indian, nomads in Mongolia, and boat builders in the South Pacific, among many other ethnological and spiritual subjects. The author of several books in German, she lives on the Canary Island of La Palma and in Munich, Germany.