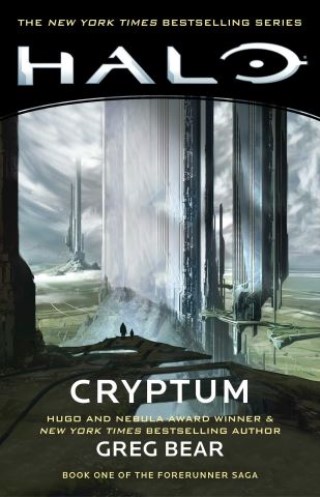 Book One of the Forerunner Saga

The first novel in the Forerunner Saga trilogy by science fiction legend Greg Bear—set in the Halo universe and based on the New York Times bestselling video game series!

One hundred thousand years ago, the galaxy was populated by a great variety of beings.

But one species—eons beyond all others in both technology and knowledge—achieved dominance.

They ruled in peace, but met opposition with quick and brutal effectiveness.

They were the Forerunners—the keepers of the Mantle of Responsibility, the next stage of life in the Universe’s Living Time.

And then they vanished.

This is their story.

Greg Bear: Greg Bear is the author of more than thirty books of science fiction and fantasy, including Hull Zero Three, City at the End of Time, Eon, Moving Mars, Mariposa, Quantico, and the New York Times bestselling Halo novels Cryptum, Primordium, and Silentium. He is married to Astrid Anderson Bear and is the father of Erik and Alexandra. Awarded two Hugos and five Nebulas for his fiction, one of two authors to win a Nebula in every category, Bear has been called the “best working writer of hard science fiction” by The Ultimate Encyclopedia of Science Fiction. His stories have been collected into an omnibus volume by Tor Books. Bear has served on political and scientific action committees and has advised both government agencies and corporations on issues ranging from national security to private aerospace ventures to new media and video game development. He is part of a long-term collaboration with Neal Stephenson and the Subutai Corporation on The Mongoliad, an interactive serial novel available on multiple platforms.