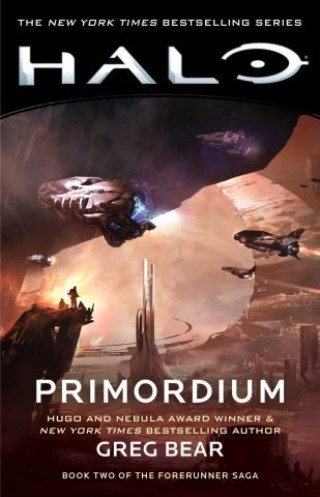 Book Two of the Forerunner Saga

The second novel of the Forerunner Saga trilogy by science fiction legend Greg Bear—set in the Halo universe and based on the New York Times bestselling video game series!

One hundred thousand years ago. In the wake of the apparent self-destruction of the alien Forerunner empire, two humans—Chakas and Riser—are like flotsam washed up on very strange shores indeed. Captured by the Forerunner known as the Master Builder and then misplaced during a furious battle in space, Chakas and Riser now find themselves on an inverted world, where horizons rise into the sky and humans of all kinds are trapped in a perilous cycle of horror and neglect. They have become both research animals and strategic pawns in a cosmic game whose madness knows no end—a game of ancient vengeance between the powers who seeded the galaxy with life, and the Forerunners who expect to inherit their sacred Mantle of Responsibility to all living things.

In the company of a young girl and an old man, Chakas begins an epic journey across a lost and damaged Halo ringworld in search of a way home, an explanation for the warrior spirits rising up within, and the reason for the Forerunner Librarian’s tampering with human destiny. Their travels will take them into the domain of a powerful and monstrous intelligence—known as “the Captive” by Forerunners, and “the Primordial” by ancient human warriors, this being may not only control the fate of Chakas, Riser, and the rest of humanity, but of all sentient life across the galaxy…

Greg Bear: Greg Bear is the author of more than thirty books of science fiction and fantasy, including Hull Zero Three, City at the End of Time, Eon, Moving Mars, Mariposa, Quantico, and the New York Times bestselling Halo novels Cryptum, Primordium, and Silentium. He is married to Astrid Anderson Bear and is the father of Erik and Alexandra. Awarded two Hugos and five Nebulas for his fiction, one of two authors to win a Nebula in every category, Bear has been called the “best working writer of hard science fiction” by The Ultimate Encyclopedia of Science Fiction. His stories have been collected into an omnibus volume by Tor Books. Bear has served on political and scientific action committees and has advised both government agencies and corporations on issues ranging from national security to private aerospace ventures to new media and video game development. He is part of a long-term collaboration with Neal Stephenson and the Subutai Corporation on The Mongoliad, an interactive serial novel available on multiple platforms.