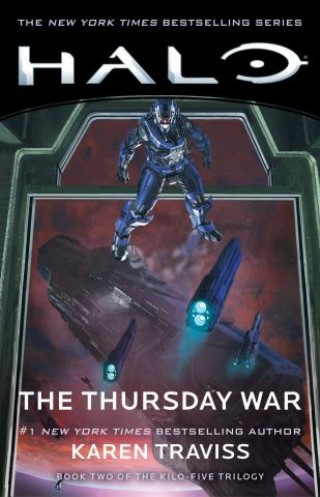 Book Two of the Kilo-Five Trilogy

The second novel of the Kilo-Five Trilogy by #1 New York Times bestselling author Karen Traviss—part of the expanded universe based on the award-winning video game series Halo!

2553. Welcome to humanity’s new war: silent, high stakes, and unseen. This is a life-or-death mission for the Office of Naval Intelligence’s black-ops team, Kilo-Five, which is tasked with preventing the ruthless Sangheili, once the military leaders of the alien alliance known as the Covenant, from regrouping and threatening humankind again. What began as a routine dirty-tricks operation—keeping the Sangheili occupied with their own insurrection—turns into a desperate bid to extract one member of Kilo-Five from the seething heart of a brutal civil war. But troubles never come singly for Kilo-Five. Colonial terrorism is once again surfacing on one of the human worlds that survived the war against the Covenant, and the man behind it is much more than just a name to Spartan Naomi-010. Meanwhile, the treasure trove of Forerunner technology recovered from the Forerunner shield world of Onyx is being put to work, even as a kidnapped Sangheili plots vengeance on the humans he fears will bring his people to the brink of destruction…

Karen Traviss: #1 New York Times bestselling novelist, screenwriter, and comic book author Karen Traviss has received critical acclaim for her award-nominated Wess’har series and Ringer series, as well as regularly hitting the bestseller lists with her Star Wars, Gears of War, and Halo work. She was also the lead writer on the blockbuster Gears of War 3 video game from Epic Games. A former defense correspondent and television and newspaper journalist, she lives in Wiltshire, England.