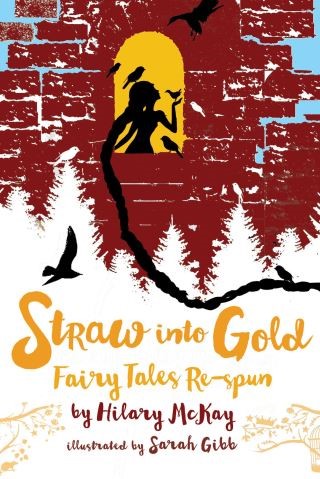 Imagine Hansel and Gretel’s story from their teacher’s point of view, when Gretel submits her report of, “What I Did in the Holidays, and Why Hansel’s Jacket Is So Tight.” Learn the story of how Rumpelstiltskin was used by a greedy girl who wanted to marry a prince in “Straw into Gold.” Find out what was really underneath all those mattresses the unlucky princess had to sleep on—and who the prince was really in love with—in “The Prince and the Problem.”

Award-winning author Hilary McKay brings a modern sensibility and inventive quirkiness to this beautiful collection of ten classic fairy tales, reimagining them with emotional depth and lighthearted humor. Each story is also accompanied by delicate black and white illustrations.

Hilary McKay: Hilary McKay is the award-winning author of The Skylarks’ War (which was a Boston Globe Best Book, and received three starred reviews), Binny Bewitched (which was a Kirkus Reviews Best Book of the Year and received two starred reviews), Binny in Secret (which received three starred reviews), Binny for Short (which received four starred reviews), and six novels about the Casson family: Saffy’s Angel, Indigo’s Star, Permanent Rose, Caddy Ever After, Forever Rose, and Caddy’s World. She is also the author of Wishing for Tomorrow, the sequel to Frances Hodgson Burnett’s A Little Princess. Hilary lives with her family in Derbyshire, England. Visit her at HilaryMcKay.co.uk.Sarah Gibb studied at Saint Martin’s School of Art (now Central Saint Martins) before completing her MA in illustration at Brighton College of Art. She illustrated Sue Townsend’s Adrian Mole series, many classic children’s fairy tales and even the Harrods Christmas window display. She lives in Wandsworth, London.