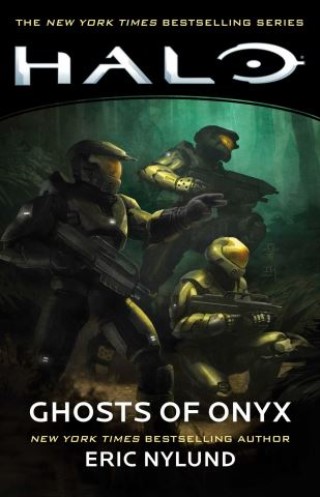 The New York Times bestseller—part of the expanded universe based on the award-winning video game series Halo!

The twenty-sixth century. Once considered clandestine, the Spartan-II program has now gone public. Tales of armored super-soldiers fending off thousands of Covenant attacks have become the stuff of legend. While the Master Chief defends a besieged Earth, and the myriad factions of the Covenant continue their crusade to eliminate humanity, an ultra-secret cell of the Office of Naval Intelligence known as “Section Three” devises a plan to buy the UNSC vital time. It will need hundreds of willing soldiers, though—and one more Spartan—to get the job done.

The planet Onyx is virtually abandoned and the perfect place to set this new plan in motion. But when the Master Chief destroys Halo, something is triggered deep within Onyx: Ancient Forerunner technology stirs, and fleets of UNSC and Covenant vessels race to claim it and change the course of the Human-Covenant War. But this reawakened and ancient force may have plans of its own…

Eric Nylund: Eric Nylund is the author of many novels, including the New York Times bestselling works Halo: The Fall of Reach, Halo: First Strike, and Halo: Ghosts of Onyx, and the World Fantasy nominated Dry Water. As a writer for Microsoft Game Studios, Nylund helped develop such game franchises as Halo and Gears of War. He has also helped shape the intellectual property for some of the world’s best videogame developers, including Bioware and Epic Games, and also worked with Amazon’s game studios. Nylund lives in the Pacific Northwest with his wife, award-winning science fiction/fantasy writer Syne Mitchell, and their son.