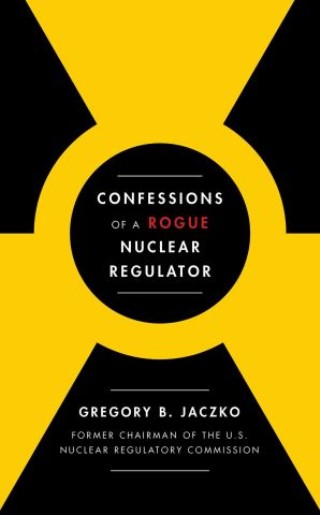 Confessions of a Rogue Nuclear Regulator

A shocking exposé from the most powerful insider in nuclear regulation about how the nuclear energy industry endangers our lives—and why Congress does nothing to stop it.

Gregory Jaczko had never heard of the Nuclear Regulatory Commission when he arrived in Washington like a modern-day Mr. Smith. But, thanks to the determination of a powerful senator, he would soon find himself at the agency’s helm. A Birkenstocks-wearing physics PhD, Jaczko was unlike any chairman the agency had ever seen: he was driven by a passion for technology and a concern for public safety, with no ties to the industry and no agenda other than to ensure that his agency made the world a safer place.

And so Jaczko witnessed what outsiders like him were never meant to see—an agency overpowered by the industry it was meant to regulate and a political system determined to keep it that way. After an emergency trip to Japan to help oversee the frantic response to the horrifying nuclear disaster at Fukushima in 2011, and witnessing the American nuclear industry’s refusal to make the changes he considered necessary to prevent an equally catastrophic event from occurring here, Jaczko started saying aloud what no one else had dared.

Confessions of a Rogue Nuclear Regulator is a wake-up call to the dangers of lobbying, the importance of governmental regulation, and the failures of congressional oversight. But it is also a classic tale of an idealist on a mission whose misadventures in Washington are astounding, absurd, and sometimes even funny—and Jaczko tells the story with humor, self-deprecation, and, yes, occasional bursts of outrage. Above all, Confessions of a Rogue Nuclear Regulator is a tale of confronting the truth about one of the most pressing public safety and environmental issues of our time: nuclear power will never be safe.

Gregory B. Jaczko: Dr. Gregory Jaczko served as Chairman of the US Nuclear Regulatory Commission from 2009–2012, and as a commissioner from 2005–2009. As Chairman, he played a lead role in the American government’s response to the Fukushima nuclear accident in Japan. Jaczko is now an adjunct professor at Princeton University and Georgetown University, and an entrepreneur with a clean energy development company. He is the author of Confessions of a Rogue Nuclear Regulator.