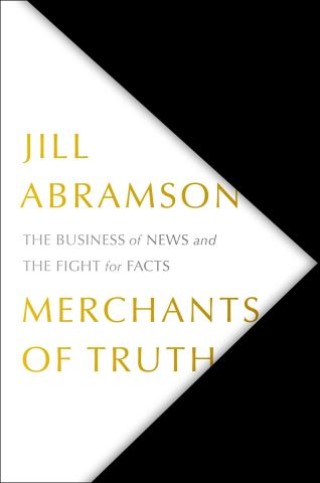 The Business of News and the Fight for Facts

Former executive editor of The New York Times and one of our most eminent journalists Jill Abramson provides a “valuable and insightful” (The Boston Globe) report on the disruption of the news media over the last decade, as shown via two legacy (The New York Times and The Washington Post) and two upstart (BuzzFeed and VICE) companies as they plow through a revolution that pits old vs. new media.

“A marvelous book” (The New York Times Book Review), Merchants of Truth is the groundbreaking and gripping story of the precarious state of the news business.

The new digital reality nearly kills two venerable newspapers with an aging readership while creating two media behemoths with a ballooning and fickle audience of millennials. “Abramson provides this deeply reported insider account of an industry fighting for survival. With a keen eye for detail and a willingness to interrogate her own profession, Abramson takes readers into the newsrooms and boardrooms of the legacy newspapers and the digital upstarts that seek to challenge their dominance” (Vanity Fair). We get to know the defenders of the legacy presses as well as the outsized characters who are creating the new speed-driven media competitors. The players include Jeff Bezos and Marty Baron (The Washington Post), Arthur Sulzberger and Dean Baquet (The New York Times), Jonah Peretti (BuzzFeed), and Shane Smith (VICE) as well as their reporters and anxious readers.

Merchants of Truth raises crucial questions that concern the well-being of our society. We are facing a crisis in trust that threatens the free press. “One of the best takes yet on journalism’s changing fortunes” (Publishers Weekly, starred review), Abramson’s book points us to the future.

Jill Abramson: Jill Abramson is a senior lecturer at Harvard University. She also writes a biweekly column for The Guardian about US politics. She spent seventeen years in the most senior editorial positions at The New York Times, where she was the first woman to serve as Washington bureau chief, managing editor, and executive editor. Before joining the Times, she spent nine years at The Wall Street Journal. The author of Merchants of Truth, she lives in New York City.