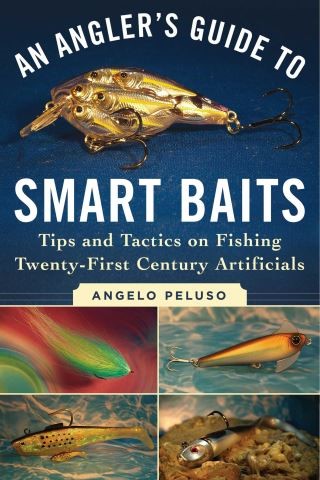 An Angler's Guide to Smart Baits

Fishing is one of the oldest continually practiced pastimes in history. But like almost everything else in our modern era, it too has been greatly influenced by ever-changing technology and scientific advances. With busy lives, it's often impossible for anglers to keep up with constantly evolving equipment. In An Angler's Guide to Smart Baits: Tips and Tactics on Fishing Twenty-First Century Artificials, veteran fisherman Angelo Peluso helps to navigate these often unsure waters of modern baits and how to fish them.
Peluso takes readers through all the essential elements. Among the topics he explains, in depth, are: the appeal and purpose of materials used in modern lure construction, including hi-tech, durable plastics, acrylics and other polymers, and new-age finishes that give impressions of life; the modern science of both hard and soft baits; the sensory appeal of modern baits; and how to maximize a bait?s appeal to yield the most strikes and increase an angler's catch ratios. Including advice and input from expert lure designers, scientists, and manufacturers, An Angler's Guide to Smart Baits is an essential read for every modern fisherman.

Angelo Peluso: Angelo Peluso has fly-fished along the entire East Coast of the United States, as well as other destinations throughout the United States, the Yucatan, Bahamas, and Canada. He is a frequent contributor to many local, regional, and national magazines and writes a weekly fishing and outdoors column. His four most recent books, Saltwater Flies of the Northeast, Fly Fishing Long Island, Saltwater Flies of the Southeast and Gulf Coast, and Fly Fishing the Surf, have received national acclaim. He is an active member of the Outdoor Writers Association of America and has written for Field & Stream, Fly Rod and Reel, and American Angler. He lives in Port Jefferson, New York.Mark Sosin is a writer, lecturer, and tackle consultant who is equally at home on a fast trout stream or aboard a bluewater big-game craft. Formerly outdoor editor for CBS Radio in New York, he is credited with writing the first comprehensive set of regulations governing saltwater fly rod catches and is recognized as an expert on light-tackle fishing. His articles have appeared in most of the major outdoor magazines, and he is the author of Angler's Safety and First Aid, coauthor of Practical Fishing Knots (with Lefty Kreh), and coeditor of Practical Black Bass Fishing (with Bill Dance). Sosin is a director of the Outdoor Writers Association and has been elected to the IGFA Fishing Hall of Fame . He lives in Boca Raton, Florida.