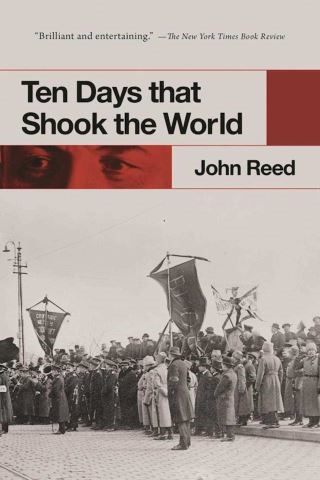 Ten Days that Shook the World

"This book is a slice of intensified history—history as I saw it.” So begins John Reed’s first-hand account of the Bolshevik Revolution of 1917. Much anticipated when it was published in 1919, Reed’s narrative remains as riveting today as when the events he describes were still reverberating throughout the world.

Reed was hardly a disinterested observer, and his involvement in the Communist labor movement lends urgency and passion to his classic account. He vividly describes events in Petrograd in November 1917, when Vladimir Lenin and the Bolsheviks stormed the Winter Palace and seized the reins of power.

Despite Reed’s personal leanings, which he made no attempt to hide, the book garnered praise from luminaries across the political spectrum. George F. Kennan, the American diplomat, and father of the policy of Soviet containment, said that “Reed’s account of the events of that time rises above every other contemporary record for its literary power, its penetration, its command of detail. It will be remembered when all others are forgotten."

Reed was committed to telling the story of the Russian revolution as truthfully as possible. That the book was banned by Russian premier Josef Stalin is a testament to the author’s success in carrying out his mission. One hundred years after Russia and the world trembled, Ten Days that Shook the World brings alive the momentous events of 1917.

John Reed: John Reed (1887-1920) was a journalist, activist, poet, and author. In addition to chronicling the Russian revolution, he reported on US labor strikes, the Mexican revolution, World War I, and was a founder of and international delegate for the Communist Labor Party. He is buried at the Kremlin Wall in Moscow.