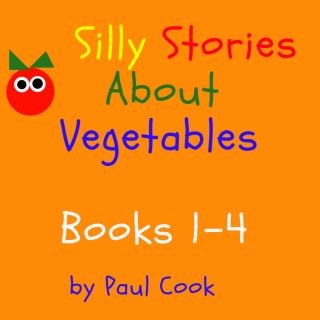 'Silly Stories About Vegetables Books 1-4' consists of twelve silly short stories about twelve different vegetables.
The first story is about a stick of rhubarb that meets a hard-boiled egg called Egg while trying to cross a cattle grid.
In the second story, there is a radish that hitches a ride down the street on a skateboard.
The third short story focuses on three meadow mushrooms in a clearing and the silly stories that they imagine, which includes a hippo that goes to school.
The fourth short story is about a sprig of parsley that runs away from a factory, ends up on a fishing boat, and narrowly escapes being eaten in a sandwich.
The fifth short story is about a carrot that finds itself being used as a nose for a snowman before falling into a drain.
The sixth story is about a turnip that causes havoc in the village by rolling down the street, through the park, into the church and bakers.
The seventh story is about a pea that was grown on Phoebe's granddad's allotment.
The eighth story is about a tomato that goes missing and ends up in a letter box.
The ninth story is about a pumpkin that was sold by a grocer to a boy and his mum at Halloween.
The tenth short story is about a leek that didn't get put in Mrs Sidebottom's stew. The children wreaked havoc with that leek when they came home from school.
The eleventh short story is about a sack of potatoes that goes on a camping trip with Iestyn and Charlie. The potatoes swim with the ducks and then get wrapped up in foil and cooked on the camp fire.
The final story is about a cauliflower that doesn't like being on display at the harvest festival in the local church. The cauliflower decides to have some fun and to disrupt the goings on.
These stories, which are also available as audio books, can be read by parents to young children or, alternatively, listened to by children of any age. The stories are written and narrated by British author Paul Cook, author of the 'Pete the Bee' stories.