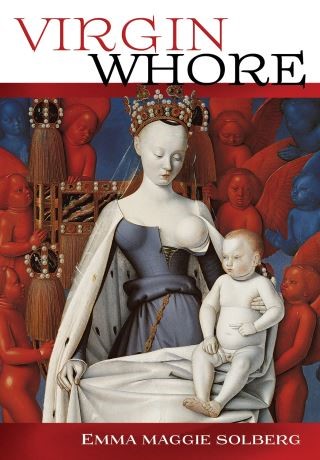 In Virgin Whore, Emma Maggie Solberg uncovers a surprisingly prevalent theme in late English medieval literature and culture: the celebration of the Virgin Mary’s sexuality. Although history is narrated as a progressive loss of innocence, the Madonna has grown purer with each passing century. Looking to a period before the idea of her purity and virginity had ossified, Solberg uncovers depictions and interpretations of Mary, discernible in jokes and insults, icons and rituals, prayers and revelations, allegories and typologies—and in late medieval vernacular biblical drama.

More unmistakable than any cultural artifact from late medieval England, these biblical plays do not exclusively interpret Mary and her virginity as fragile. In a collection of plays known as the N-Town manuscript, Mary is represented not only as virgin and mother but as virgin and promiscuous adulteress, dallying with the Trinity, the archangel Gabriel, and mortals in kaleidoscopic erotic combinations. Mary’s "virginity" signifies invulnerability rather than fragility, redemption rather than renunciation, and merciful license rather than ascetic discipline. Taking the ancient slander that Mary conceived Jesus in sin as cause for joyful laughter, the N-Town plays make a virtue of those accusations: through bawdy yet divine comedy, she redeems and exalts the crime.

By revealing the presence of this promiscuous Virgin in early English drama and late medieval literature and culture—in dirty jokes told by Boccaccio and Chaucer, Malory’s Arthurian romances, and the double entendres of the allegorical Mystic Hunt of the Unicorn—Solberg provides a new understanding of Marian traditions.