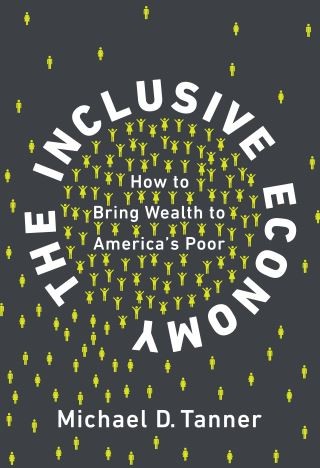 How to Bring Wealth to America's Poor

The Inclusive Economy: How to Bring Wealth to America’s Poor energetically challenges the conventional wisdom of both the right and the left that underlies much of the contemporary debate over poverty and welfare policy. Author and national public policy expert Michael Tanner takes to task conservative critiques of a “culture of poverty” for their failure to account for the structural circumstances in which the poor live. In addition, he criticizes liberal calls for fighting poverty primarily through greater redistribution of wealth and new government programs.

Rather than engaging in yet another debate over which government programs should be increased or decreased by billions of dollars, Tanner calls for an end to policies that have continued to push people into poverty. Combining social justice with limited government, his plan includes reforming the criminal justice system and curtailing the War on Drugs, bringing down the cost of housing, reforming education to give more control and choice to parents, and making it easier to bank, save, borrow, and invest.

The comprehensive evidence provided in The Inclusive Economy is overwhelming: economic growth lifts more people out of poverty than any achievable amount of redistribution does. As Tanner notes, “we need a new debate, one that moves beyond our current approach to fighting poverty to focus on what works rather than on noble sentiments or good intentions.” The Inclusive Economy is a major step forward in that debate.