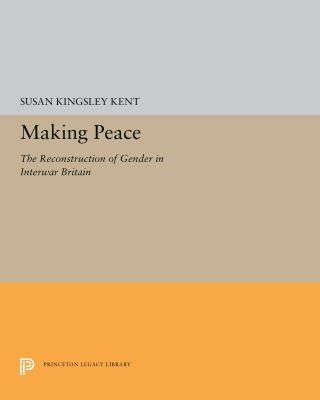 The Reconstruction of Gender in Interwar Britain

Making Peace provides a fresh context for understanding gender relations in interwar Britain, seeing in the emergence of a powerful ideology of motherhood and a reemphasis on separate spheres for men and women a corollary to the political and economic restructuring designed to reestablish social order after World War I. The war had often been explained and justified to the British public by means of images that portrayed women as hostile or frightening—or as victims of sexual assault, as in the Belgian atrocity stories. These sexualized interpretations of war then shaped postwar understandings of gender, as psychiatrists, psychologists, and sexologists drew on metaphors of war to talk about relationships between men and women, likening any conflict between the sexes to the terrible chaos of the war years.
Drawing on materials from posters to popular songs, from government reports to journalistic accounts, from memoirs and novels to diaries and letters, Making Peace is a penetrating analysis of how gendered and sexualized depictions of wartime expereinces compelled many Britons to seek in traditional gender arrangements the key to postwar order and security. In the interwar period, many feminists compromised their earlier positions in an effort to contribute to postwar recovery, and justified their demands—for birth control and family endowment, for example—in conservative terms that ultimately hampered their movement.
Susan Kingsley Kent is Associate Professor of History at the University of Colorado at Boulder. She is also the author of Sex and Suffrage in Britain, 1860-1914 (Princeton).