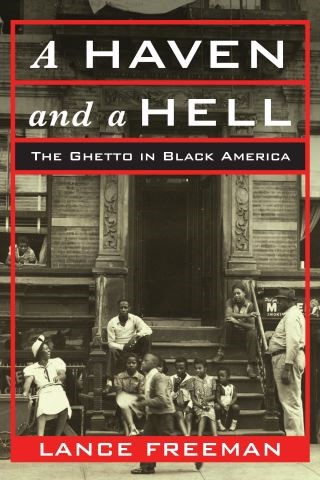 A Haven and a Hell

The Ghetto in Black America

The black ghetto is thought of as a place of urban decay and social disarray. Like the historical ghetto of Venice, it is perceived as a space of confinement, one imposed on black America by whites. It is the home of a marginalized underclass and a sign of the depth of American segregation. Yet while black urban neighborhoods have suffered from institutional racism and economic neglect, they have also been places of refuge and community.

In A Haven and a Hell, Lance Freeman examines how the ghetto shaped black America and black America shaped the ghetto. Freeman traces the evolving role of predominantly black neighborhoods in northern cities from the late nineteenth century through the present day. At times, the ghetto promised the freedom to build black social institutions and political power. At others, it suppressed and further stigmatized African Americans. Freeman reveals the forces that caused the ghetto’s role as haven or hell to wax and wane, spanning the Great Migration, mid-century opportunities, the eruptions of the sixties, the challenges of the seventies and eighties, and present-day issues of mass incarceration, the subprime crisis, and gentrification. Offering timely planning and policy recommendations based in this history, A Haven and a Hell provides a powerful new understanding of urban black communities at a time when the future of many inner-city neighborhoods appears uncertain.