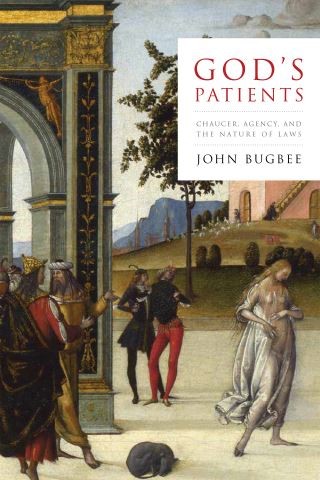 Chaucer, Agency, and the Nature of Laws

God’s Patients approaches some of Chaucer’s most challenging poems with two philosophical questions in mind: How does action relate to passion, to being-acted-on? And what does it mean to submit one’s will to a law? Responding to critics (Jill Mann, Mark Miller) who have pointed out the subtlety of Chaucer’s approach to such fundamentals of ethics, John Bugbee seeks the source of the subtlety and argues that much of it is ready to hand in a tradition of religious (and what we would today call “mystical”) writing that shaped the poet’s thought. Bugbee considers the Clerk’s, Man of Law’s, Knight’s, Franklin’s, Physician’s, and Second Nun’s Tales in juxtaposition with an excellent informant on a major stream of medieval religious culture, Bernard of Clairvaux, whose works lay out ethical ideas closely matching those detectable beneath the surface of the poems. While some of the positions that emerge—most spectacularly the notion that the highest states of human being are ones in which activity and passivity cannot be disentangled—are anathema to much modern ethical thought, God’s Patients provides evidence that they were relatively common in the Middle Ages. The book offers striking new readings of Chaucer’s poems; it proposes a nuanced hermeneutical approach that should prove fruitful in reading a number of other high- and late-medieval works; and, by showing how assumptions about its two fundamental questions have shifted since Chaucer’s time, it provides a powerful new way of thinking about the transition between the Middle Ages and modernity.