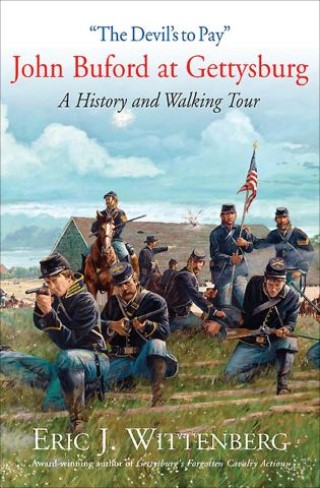 "The Devil's to Pay"

John Buford at Gettysburg: A History and Walking Tour

An award-winning Civil War historian’s profile of the brilliant Union cavalry officer and the strategies he employed to prevent catastrophe at Gettysburg.

The Battle of Gettysburg turned the tide of the Civil War. But the outcome of the decisive confrontation between North and South might have been dramatically different if not for the actions of Brig. Gen. John Buford, commander of the Union army’s First Cavalry Division.

An award-winning chronicler of America’s War between the States and author of more than a dozen acclaimed works of historical scholarship, Eric J. Wittenberg now focuses on the iconic commanding officer known to his troops as “Honest John” and “Old Steadfast.” Wittenberg describes in fascinating detail the brilliant maneuvers Buford undertook to keep Gen. Robert E. Lee’s Confederate army at bay and later rescue what remained of the devastated First and Eleventh Corps.”The Devil’s to Pay” celebrates the stunning military achievements of an unparalleled tactical genius at the onset of the Gettysburg Campaign and paints an unforgettable portrait of a quiet, unassuming cavalryman who recognized a possible disaster in the making and took bold action to avert it.

Based on a wealth of information from primary sources, “The Devil’s to Pay” includes pages of illustrations, maps, and photographs, as well as a walking and driving tour of the battlefield sites where America’s history was made at a staggeringly high cost in blood. A comprehensive tactical study that is both scholarly and eminently accessible, it is an essential addition to the library of any Civil War enthusiast.