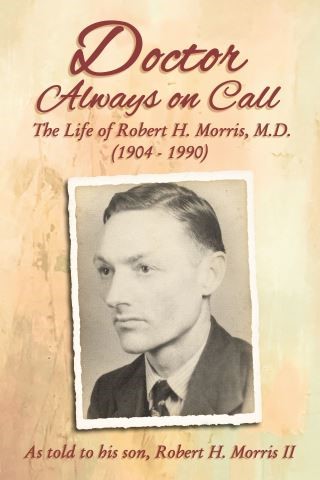 Robert Morris II recorded eight hours of interviews with his father, Robert Morris, MD (1904-1990), from which he drafted an autobiography and presented it to his dad on his 85th birthday. Until Dr. Morris’ death 15 months later, they collaborated to correct and add to the original memories. Dr. Morris’ career was unique in several ways: He dropped out of medical school twice, returning to farming, then vowed that he’d become a doctor or die. The third time in medical school, he led his class most quarters. Marrying and nurse and settling in the village of Medina (pop. 400) in 1935, his practice and reputation—especially as a diagnostician—grew until his death. He made home visits extending to five counties, the last doctor to do so in this area, delivering some 2000 babies in the home, while also serving in four hospitals. He was a devout Christian and lay leader in his church. Two of his daughters married doctors, two others became career teachers who also married teachers, and his son had a varied career, ending as a writer. Dr. Morris tells both painful and humorous stories about his life.

Robert Hunt Morris, II, a lifelong spiritual seeker, encountered Jesus at age nine. He left orthodox Christianity in his 20s, but never lost his love of Jesus. He was an active Quaker for 15 years, explored Eastern religions, and enjoys woodworking, writing, and editing. He married Jeanne Elizabeth Sokol, to whom three children were born. They lived from New York City to Oklahoma, and finally Tennessee in 1996. Today he is active in an evangelical United Methodist church