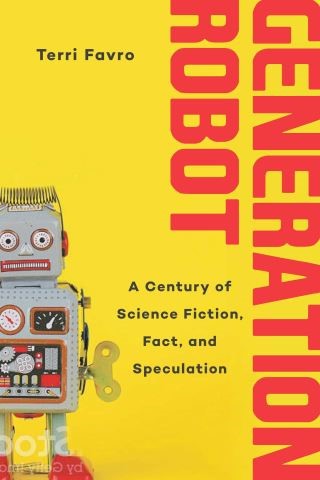 A Century of Science Fiction, Fact, and Speculation

Generation Robot covers a century of science fiction, fact and, speculation—from the 1950 publication of Isaac Asimov’s seminal robot masterpiece, I, Robot, to the 2050 Singularity when artificial and human intelligence are predicted to merge. Beginning with a childhood informed by pop-culture robots in movies, in comic books, and on TV in the 1960s to adulthood where the possibilities of self-driving cars and virtual reality are daily conversation, Terri Favro offers a unique perspective on how our relationship with robotics and futuristic technologies has shifted over time. Peppered with pop-culture fun-facts about Superman’s kryptonite, the human-machine relationships in the cult TV show Firefly, and the sexual and moral implications of the film Ex Machina, Generation Robot explores how the techno-triumphs and resulting anxieties of reality bleed into the fantasies of our collective culture.

Clever and accessible, Generation Robot isn’t just for the serious, scientific reader—it’s for everyone interested in robotics and technology since their science-fiction origins. By looking back at the future she once imagined, analyzing the plugged-in present, and speculating on what is on the horizon, Terri Favro allows readers the chance to consider what was, what is, and what could be. This is a captivating book that looks at the pop-culture of our society to explain how the world works—now and tomorrow.

Terri Favro: Terri Favro, winner of the CBC Creative Non-fiction Prize for her essay “ Icarus,” is the author of the novels Sputnik’ s Children, Once Upon A Time In West Toronto, and The Proxy Bride, and the co-creator of a series of comic books published by Grey Borders Books. She has written marketing copy for IBM, Apple, Blackberry and LEGO, among others. She lives in Toronto.