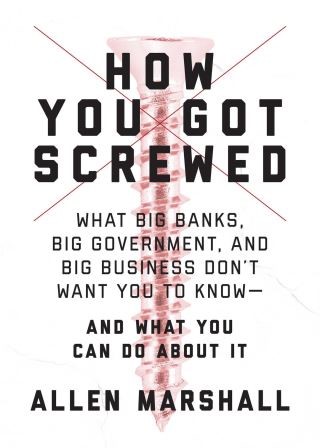 How You Got Screwed

What Big Banks, Big Government, and Big Business Don't Want You to Know—and What You Can Do About It

If you’re like most people, you want nothing more than a fair shot in life: a chance to seek out opportunities, work hard, and make your own way in this world. But as author Allen Marshall explains in How You Got Screwed, the game has been rigged, making it almost impossible for you to win.

How You Got Screwed explains exactly how the rules have been made to favor those in charge. Consider the financial system, which steals your earning power with money that doesn’t hold its value and lets banks break the law practically without consequence. Think about our politicians, who serve their donors and lobbyists, and a government more interested in serving itself than its people. And remember big business, which uses its money and political power to twist the rules in their favor, hurting you as a consumer, employee, and citizen.

Yes, the cards are stacked against you. But that’s only if you play by their rules. It’s time to play your own game—and How You Got Screwed is your guide to making the system work for you.

Allen Marshall: When people talk about living the American Dream, they could easily be describing Allen Marshall: a successful entrepreneur with a wife, two kids, two dogs, and a house with a white picket fence in the suburbs. But he realized long ago that his children, and millions of others like them, would never have a chance to realize their own dreams because a small group of greedy businesspeople and self-serving politicians had rigged the rules in their favor. He wrote this book so that they—and you—can understand how the game is rigged, who rigged it, and what you can do about it.