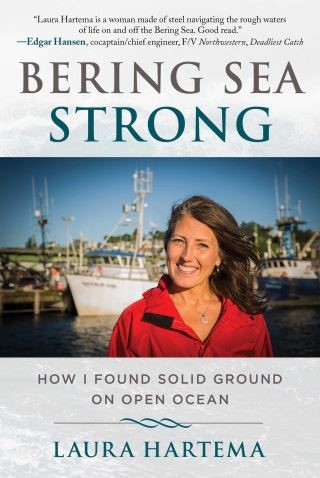 How I Found Solid Ground on Open Ocean

Bering Sea Strong is a tale of adventure and self-discovery. The story portrays a young woman on a solo journey, pushed to the edge of the earth and further from the weight of family—marked by divorce, death, disability, and depression—and a life she desires on land.

Locked at sea for ninety days as the lone female trying to tuck in tight alongside twenty-five rough-and-tumble commercial fishermen in Alaska, Laura Hartema offers a rare glimpse into the intertwining worlds of a fisheries observer and the crew she works beside. She graphically illustrates the challenges of daily life and relationships in a way few have seen before. Her story provides an unprecedented portrait of the bizarre and entertaining human dynamics aboard an at-sea catcher-processor vessel, where men battle dangerous working conditions, loneliness, and boredom while rivaling for the attention of the only woman.

Between trough and crest, Laura ponders the trauma and tragedies of her Midwest childhood as her capabilities and resilience are regularly tested. She is often left deciding when to “blow it off” and when to “blow a gasket.” In the end, the tumultuous Bering Sea is where she finds the strength to overcome the wounds of her past, embrace life’s uncertainty, and steam ahead into the unchartered waters of her future. Bering Sea Strong demonstrates one woman’s determination to overcome obstacles in pursuit of a satisfying career and a better life.

Laura Hartema: Laura Hartema was born and raised in Chicagoland and earned a Bachelor of Science in biology from College of the Ozarks in Branson, Missouri. The challenging work and adventures depicted in Bering Sea Strong led to Hartema’s present career as an ecologist focusing on stream and wetland restoration. Her passion for her work and love for nature spills into her community, where she leads volunteers in stream enhancement efforts. She encourages others to seek inspiration, beauty, and humor in her blog, Love This Day (www.LauraHartema.com). Hartema resides in the Seattle area and spends much of her time outdoors embracing Puget Sound and the Cascade and Olympic mountains.