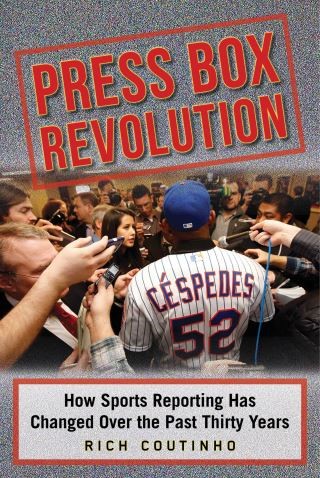 How Sports Reporting Has Changed Over the Past Thirty Years

Press Box Revolution is a journey through the evolution of reporting in New York and around the nation by a reporter who has witnessed every second of it in the past three decades. Rich Coutinho, a New York-based reporter who has covered numerous major sporting events, will escort readers into corners of the press box and locker room they have never seen and discusses what the business will look like down the road. Coutinho gives an insider’s view of the evolving technology in the business, the growth of women in sports creating much needed diversity in the reporting landscape, the emergence of sports talk radio and the Internet, as well as the personalities on the New York sports scene that make it so challenging to cover. Press Box Revolution lifts the curtain on all the myths about how sports is reported and it will help fans realistically evaluate the information they read and hear that is labeled Breaking News” or Insider Report.” It is a must-read for all well-informed fans and aspiring sports journalists.

Rich Coutinho: Rich Coutinho has been a sports reporter for over thirty years in the New York City area for such outlets as ABC Radio, ESPN New York 98.7, and WFAN Radio. He has covered the New York Mets since 1984 and reported on the Super Bowl and the World Series as well as the NBA and Stanley Cup Finals. He has also covered national and international events like the Olympics, the NCAA Men’s Basketball Tournament, the Masters, the Indianapolis 500, and a plethora of college football throughout the country. The author of Press Box Revolution, he lives in Rye, New York.